CNN is first on the web with todays testimony in the Johnny Depp vs. Amber Heard defamation lawsuit.

(CNN) Actor Johnny Depp took the stand in a Fairfax, Virginia court on Tuesday in his defamation case against his ex-wife Amber Heard.”My goal is the truth,” Depp said early in his remarks.

Depp is suing Heard for $50 million over a 2018 Washington Post op-ed in which she wrote about domestic abuse.

The piece published roughly two years after Heard alleged Depp bruised her face after throwing a phone at her in their Los Angeles home. Depp denied the allegation and was not charged with any crime.

Depp acknowledged in his testimony that he and Heard had arguments during their relationship but said, “Never did I myself reach the point of striking Ms. Heard in any way nor have I ever struck any woman in my life.”

He also described his parents’ tumultuous relationship and the verbal and physical abuse he and his siblings experienced by their mother.

Depp was not referred to by name in Heard’s piece. Still, Depp claims it led to financial losses for him, including being dropped from future “Pirates of the Caribbean” films after he led the franchise for 15 years.

“One day you’re Cinderella so to speak and then in zero point six seconds you’re Quasimodo,” Depp said of how his career turned after he was accused of abuse. “I didn’t deserve that and nor did my children, nor did the people who had believed in me all these years.”

‘She was too good to be true’

The trial began last week. Depp said his testimony was the “first opportunity I’ve had to speak about this case in full.” 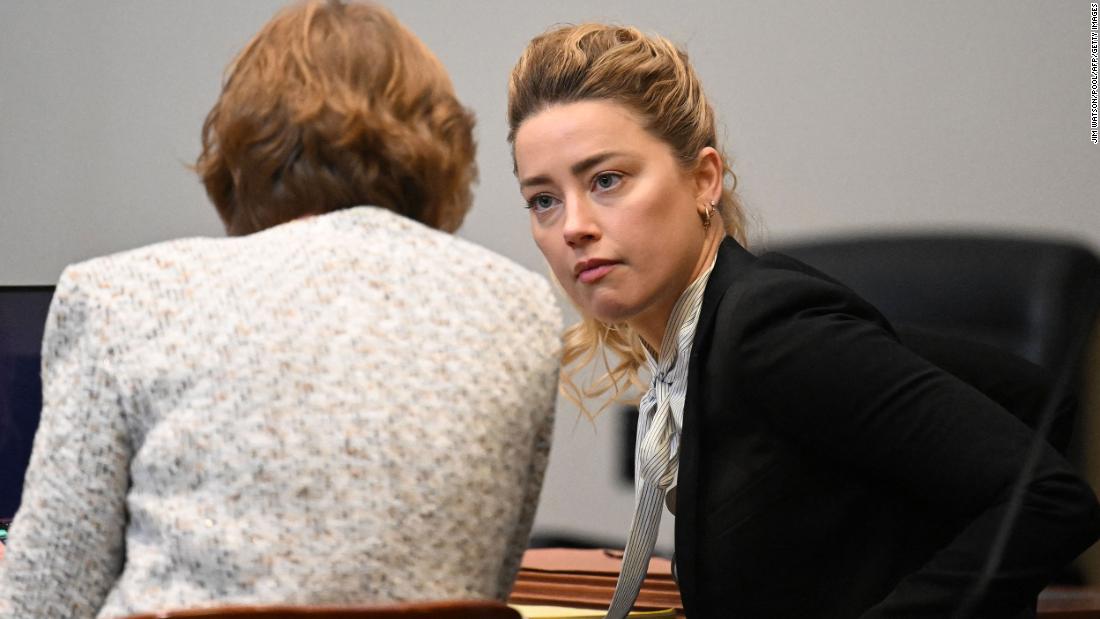 Amber Heard speaks to her attorney at the Fairfax County Circuit Courthouse in Fairfax, Virginia on Tuesday.

Depp and Amber met on the set of “The Rum Diary” in 2009, married in 2015 and went on to be embroiled in a contentious split for months, with charges of bad behavior levied by both sides. In his testimony, Depp spoke about the beginning of his relationship with Heard, saying “from what I recall, what I remember, she was too good to be true.” “She was attentive, she was loving, she was smart, she was kind, she was funny, she was understanding. We had many things in common,” he said.

Johnny Depp and Amber Heard court battle: What you need to know

Depp said Heard was “wonderful” for some time between a year and a year and a half. “Then things just started to change — or things started to reveal themselves, is a better way to put it.”

The couple settled their divorce in August 2016, releasing a joint statement which read in part, “Our relationship was intensely passionate and at times volatile, but always bound by love. “Heard had been unsuccessful in her attempts to get the suit dismissed. She filed a $100 million defamation countersuit against Depp in 2020, which is ongoing. Late last year, Depp lost a case in the UK against News Group Newspapers and Dan Wootton, executive editor of The Sun, over an article that claimed Depp was violent toward Heard while they were together. The UK’s High Court ruled in the publisher’s favor. Lawyers for the newspaper group argued in court filings that Depp “beat his wife Amber Heard, causing her to suffer significant injury, and on occasion leading to her fearing for her life,” citing evidence, including photos, audio recordings and Depp’s own text messages.

During the trial, Depp said the tabloid’s claims that he was violent toward Heard were “completely untrue.” Judge Andrew Nicol said in his judgment that the paper’s claims had been shown to be “substantially true.”

Heard posted a note in advance of the current defamation trial on her verified social media accounts, writing “I never named [Depp], rather I wrote about the price women pay for speaking against men in power. I continue to pay that price, but hopefully when this case concludes, I can move on and so can Johnny.” “I have always maintained a love for Johnny and it brings me great pain to have to live out the details of our past life together in front of the world,” she wrote. “At this time, I recognize the ongoing support I’ve been fortunate to receive throughout these years, and in these coming weeks I will be leaning on it more than ever.”

IAEA For Prostate Lawyers Only
Is Richard Ahlheim Connected to Starland?
Megan's Law 2.0
You Need a Criminal Attorney and Not a Paralegal for Expungement

Born a poor peckerwood in a Tujunga holler, Dean practiced secrets of the ancient & modern masters to end up liberated in the coastal paradise of West L.A.